What Will It Be Like
When The Church Dispensation Ends?

One thing is for certain, the minute the Church age is over the Lord will take hold of and ‘own’ all media whether newspapers, TV channels – private or public – and He will rule all military powers in the entire world, including super-powers like USA, Russia and China.

From now on no leader of state, military or other big enterprises can do anything unless the Lord has approved it. He will hold His hands on every detail in the process leaving nothing to coincident.

God and Christ in heaven will take command of all their movements and decisions. He will even impress certain thoughts and ideas in their minds to make them carry out His will and His agenda!

In Rev. 17:17 we are told that God put the thoughts into the mind of the anti-Christ to destroy and burn the Babylon harlot – so that the prophetic words of God can be fulfilled.

This is how it actually was in the times of Jesus and the apostles. God had a hand in all the dealings of the Roman Empire. And Paul described this kind of rule – so the Jews could understand that they would have to abide and submit to this rule of the Lord. Paul also taught in Rom. 13:1-5 that the Romans carried the sword to punish evil, and that the righteous would not be stricken with such punishment. The Romans, in other words, policed over the unfaithful Israel. God used them as His army!

This was only valid during the time of the apostles, and was dismissed the same moment that the Church dispensation was established, by Paul writing Ephesian- and Colossian epistles. Israel fell from God as seen in Acts 28:25-28 – they would not repent so the Lord could heal the land. They were destroyed because of this. But the arrival of Moses and Elijah in near future is a mission to purge and cleanse and elect a new Israel for the Lord, all of them believing on Jesus Christ.

In His prophetic parable in Matt. 22:7 of the King’s servants (which were the apostles) He called the Roman Army for ‘His soldiers’ – as Jesus clearly set forth Himself as the king who would send this army to kill the persecutors of the apostles. Not only that, but the army would burn their city, Jerusalem. And this was fulfilled in 70 AD.

But as we have had almost 2000 years of the free grace dispensation – as displayed by the Church and the grace gospel of Paul, the apostle to the Gentiles, God has not brought any form of doom or judgments on earth. It has been the rule of mankind and our way of trying to keep law and order. The WW 1 and 2 were not doom or judgments from God; we ourselves inflicted those upon this world, and with great losses of lives and materials.

But at the prophesied arrival of the two witnesses in Rev. 11, Moses and Elijah, God are taking back rule and judgments and will have these two great prophets of the Lord administer the Great Tribulation, which Jeremiah called ‘The time of Jacob’s trouble’, Jer. 30:7.

The same as Jesus called a ‘tribulation which there had not been the likes of in history, and which there would be nothing like in the world after that’. This tribulation in Israel will be the ‘All Time Low’ in her entire history and existence. Matt. 24:21.

Isaiah called that tribulation climax for ‘The day of vengeance of our God’, Isa. 61:2. Jesus deliberately left out that line of words, and read only the first half, that of the ‘Acceptable year of the Lord’ in His speech in the Synagogue at Nazareth, knowing that the day of vengeance was in the far future due to Israel’s disobedience and unbelief.

In this article I have taken the liberty in making three fictive, but very probable newspaper front pages…as the arrival of the two prophets in Rev. 11 will cause great calamity and fear inside Israel, and also therefore via TV Medias and newspapers inflict fear and astonishment in the rest of the civilized world.
The events caused by the two witnesses in Rev. 11 are so extreme and strikingly powerful, that their actions will overtake the front-pages around the world instantly!

This is the fearful and imposing mandate they have – as described in Rev. 11:6,

“These two witnesses have power to shut up the sky, so that no rain may fall during the days of their prophesying; and they also have power to turn the waters into blood and to smite and scourge the earth (land of Israel) with all manner of plagues as often as they choose.”

This, dear reader, means that such signs/punishments will be cast upon Israel; in a repetitive sense. It says ‘As often as they choose’.

It means for instance, as they first use the bloodied waters to shake them up and getting Israel’s attention, they will call this plague off if Israel say they will repent to Jesus Christ. However, the shutting up of the sky for rain seems to be held fast in all the 1260 days of their time prophesying.

The two are ‘dressed down’ in sack cloth (which was used by prophets of old as a sign of sorrow and repentance) – but in real power they lack nothing: Fire will strike from heaven upon their word, and consume their foes if anyone tries to harm or kill them! This is found in verse 5, and will obviously also happen. They will open fire against them, hoping to get rid of the plagues and punishments they cause upon Israel. But Israel will fearfully and trembling watch as fire like lightening falls from above, entirely consuming them, no corpses left.

The blood-sign comes back with fierce and frightful power in Rev. 16, after the departure of the two prophets. But as Moses used that sign as the very first action against Pharaoh Ramses II, I believe this will also be the case when Moses confronts the Knesset parliament in Jerusalem, prophesying against them.

Here is my first two futuristic ideas of how a major newspaper’s front page would look like when these things starts happening: 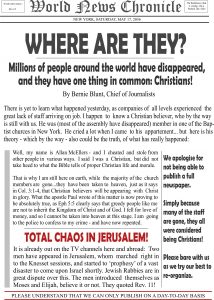 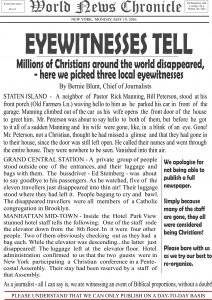 The conclusion of the Church age will not go unnoticed, I promise you. The world will remain in shock and awe over the disappearance of millions of Christian believers. My ideas expressed here is rather limited. The TV media and papers will overflow with all kinds of speculations. This is not something that can be kept under a lid, hidden from public. The world will go totally ‘bananas’ over it. 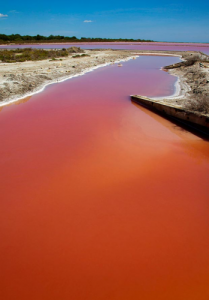 And at the same time learn another shocking event, which is the arrival of the two prophets in Israel. Skepticism will quickly evaporate as the scaring blood sign strikes, and not the least when the sky over Israel is shut up for rain, causing severe drought.      IMAGE: Jordan bloodied.

These two events – the disappearance of Christian believers on a huge scale world-wide, plus the judgments and signs cast upon Israel by the two witnesses – will rule and terrorize and dominate all the media-world during the entire 7 years of tribulation, up until Jesus comes down from heaven in great power and glory and with His armies of angels.

NOTICE: Since I am using fictive newspaper front pages to illustrate my idea of it all, I had to put dates there…using May in the year 2036. This must not be mistaken for any prophesy on my side. It is only a fictive setting, however so probable. It could happen earlier or later, we will not know. But these events will take place, for the Bible says so!

Here is the third front page of my little effort to give you an idea of how it all could unfold, media-vise:

NOTICE:  If the images of these fictive newspaper front-pages comes blurry and not easy to read, please check the adjustment of your PC or Mac Screen settings. I apologize for any inconvenience in this regard. If you wish, I can email the newspages to you. Just send me a mail! 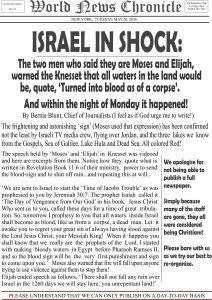