I would like to begin this article by referring to another one, called “Israel With Jerusalem Is Babylon the Great Harlot in Rev. 17” – in which I prove by many Bible references and expository, refuting the false ideas found inside Christianity that Babylon is the Vatican, or USA, or a restored Babylon in Iraq, – that those are not the Babylon harlot in Rev. 17-18 at all.

It is Israel with its capital Jerusalem.

In this article we shall have a closer look at the translations of certain key-words/expressions – that lead preachers into false ideas in this regard.

One of the most noteworthy Youtube videos on USA figuring as the fulfilment of the prophesy of Babylon harlot in Rev. 17-18, is one made by pastor Steven Anderson in a Baptist Church in Phoenix, AZ. I have included the video in this article, at the end of it. You judge for yourself if my assertions are right or not. 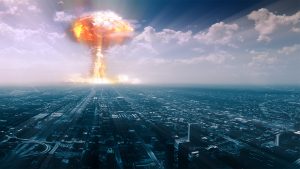 You will see and hear pastor Anderson teaching that he sincerely believes that USA shall be nuked in near future, because of the judgment God shall cast upon the Babylon harlot – which in his opinion is USA. IMAGE: Chicago nuked.
Let me quickly remark that I also have another video with Anderson, in this website, wherein he is chastising and rebuking the Pope for his false teachings. I simply agree with Anderson that in this matter, he is right about the falsehood of the Pope. So, Anderson can produce some very good stuff in one instance, as well as not so well put together stuff in another; such as the Babylon-video.

But in the video included here in this article, my pointing to errors in translations, it is to me pretty obvious that Anderson does not twist-and-turn and in any way abuses the Bible for his own agenda. No, he comes to his conclusions much based upon what the KJV-Bible has in it of translation errors. Most Bibles have the very same errors, and KJV is but one among several. Thus Anderson seems to be in what we call ‘good faith’ when presenting his topic.

In my opinion Steven Anderson is a real and sincere Christian believer, trying to do his best, for the benefit of other Christians.

I will concentrate in pointing to errors in a few key-words/expressions which do repeat themselves in most Bible translations, causing the Bible reader to make wrong assumptions and conclusions of a topic.

These are: (Amplified Bible)

There is no doubt that the Book of Revelation deals mainly with the time which Jesus Himself characterized, – quote:

‘For then there will be great tribulation such as has not been from the..” Matt.24:21.

It is ONLY ISRAEL which is subject to these horrors and tribulation, the vengeance coming upon the nation from God – it is NOT concerning any gentile nations at all. Same manner as when God had Egypt destroyed by signs and plagues under Moses, but no nation elsewhere suffered any such hardships.

But wrongly translation of the Greek word cosmos – which can mean many things, land, nation, area, world or the entire earth and so forth. Often it is translated as the latter, earth or the entire world. This is where most translators make their errors. They write ‘Earth’ where it should have said ‘Land’ or ‘Nation’.

All four quotes from Rev. above, should have said ‘Nation’ or ‘Land’.

The mark of the beast (Anti-Christ) in Rev. 13 as well as the use of it as people followed this beast, should have read ‘And all the inhabitants of the nation will fall down…’ Rev. 13:8.

Also, the expression used in Rev. 6:15 – ‘Then the kings of the earth and their noblemen…’ – should have read ‘Kings of the nation’ – because these kings are the ones mentioned in Rev. 17:12 in connection to the Antichrist as ruling together with them. They are tribal leaders of a false tribal system in the end times, opposing the genuine tribal Jews seen in Rev. 7 and 14. Antichrist is a false messiah, the Second beast called the false prophet, is a false Elijah, and the ten kings in Rev. 17 are false tribal leaders as they will take power over Israel after dividing it into tribal districts.

They beg the mountains, ‘Fall on us and hide us from the wrath of the Lamb’.

In this issue we are so lucky as to have the Lord Jesus’ own words clarifying this to us. He spoke to the people along the Via Dolorosa as He walked up to Calvary for the crucifixion. But most translators have just passed this unnoticed, believe it or not.

Luke 23:27-31 points us in the right direction, namely that it is the descendants of the Jews from the time of Jesus on earth, who shall be calling for the mountains to fall upon them and hide them, as follows:

“And there accompanied Jesus a great multitude of the people, women who bewailed and lamented Him. 28: But Jesus, turning toward them, said, Daughters of Jerusalem, do not weep for me, but weep for yourselves and for your children. 29: For behold, THE DAYS ARE COMING DURING WHICH THEY WILL SAY, BLESSED ARE THE BARREN, AND THE WOMBS THAT HAVE NOT BORNE, AND THE BREASTS THAT HAVE NEVER NURSED. 30: THEN THEY WILL BEGIN TO SAY TO THE MOUNTAINS, FALL ON US! AND TO THE HILLS, COVER (HIDE) US! 31: For if they do these things when the timber is green, what will happen when it is dry?”

In my Norwegian Bible of 1988, verse 31 says, ‘For if they do this with the green tree (Jesus), what will happen to the dry one (unbelieving Israel)?

If thereby Rev. 6:15, 16 of those who beg the mountains and hills to hide them from the Wrath of the Lamb, just like what Jesus told them when going up to Calvary, – they will receive punishment for the second time since 70 AD for their killings and not the least for their long persistent denial and blasphemy of Jesus (Ez. 36:23), – then Rev. 6 is not only geographically pointing to Israel, but the entire Revelation book in which the tribulation is prophesied of. These things will take place inside Israel! The mountains and hills are not Rocky Mountains in USA or the Alps in Austria/Switzerland, or the Himalaya massive in Nepal!

The diverse Bible Translation Committees around the civilized world will probably never really get themselves to correct all their faulty work! I am sure.

That is why it is good that we as free Christians can undertake such a task and do important corrections for the benefit of all readers of the Bible.

I can’t help suspecting that pastor Steven Anderson, as already mentioned, and many more of course, have been victimized by lacking translations like the examples I have used above. Believing that certain prophesies speak of USA or the global world when in reality it speak of Israel only. My sympathies are on their side, since it is the Bible translation which brings in the faulty understanding in many topics.

Steven Anderson, however innocent of having ‘twisted’ the Word of God in this matter, he could perhaps still have made self-corrections in the idea that USA will be nuked since he thinks the nation is the Babylon harlot of Rev. 17-18. How? By simply using his brains a little more by dwelling on what it actually means that USA will be nuked. Ask any of the nuke-officials in Pentagon what will happen if nukes are sent against USA, the mightiest nation on earth, ever!

If God has decided to have USA nuked – it means that some other nation must do that job, right? Well, mister smart-guy Bible-slinger, that means the whole world will be nuked, thus going into total destruction. If Russia or China or whichever nation opens fire first, USA will have their Mega-Ton nukes on their way to their enemies before any nuke hits American soil! This I can guarantee!

If God meant to just punish and destroy USA/Babylon harlot, the end result will never the less be the scenario I just mentioned: The whole earth laid waste, turned into a burnt desolate dung of radioactive gravel and dust and whatnot. Is this how God deals with sinners? I don’t think so. He saved Lot and his family out of Sodom before fire fell from heaven. God made distinction between unrighteous and righteous, and He will always do that, always.

God has no intention in sending Jesus back to earth to rule as king upon a burnt dung and heaps of radioactive gravel and ruins from an atomic war.

Jerusalem has been destroyed before in history, but rebuilt thereafter. That will happen also when the Great Tribulation has been stopped by the Lord’s coming from above. See Rev. 19-21. And then the Babylon-harlot religious system will be gone forever.

The Bible is very clear on Israel/Jerusalem being the Babylon harlot in Rev. 17-18.

The smoke coming from Babylon-harlot in Rev. 17-18 is not necessarily the effect of a detonated nuke.

There are other methods to burn Jerusalem. It’s a fact.

Final comment: Steven Anderson’s exhortation and spiritual chastisement on his nation USA, I recommend you all listen to! USA has a lot to answer to before the Lord, and Anderson’s lecture here is good stuff in that regard. God strongly bless him and his Assembly, preaching the Gospel of God’s unmerited Grace.

BELOW IS THE STEVEN ANDERSON VIDEO – make your own opinion of this. Compare it with what I have told you in this article, – and reason over this!