ROMANS 2:29 ON THOSE HAVING FAITH IN CHRIST
BEING THE REAL JEWS

Many – sorry to say – preachers and pastors are totally into a spiritual fog when saying and believing that Rom. 2:29 speak of Christians like us, representative of the Church today, because the passage does NOT speak of us in the Church dispensation. Let me explain this.

Paul wrote the epistle to the Romans when his ministry still was only for Israel and the proselytes. The Church did not even exist at that time. It was only the believing Messianic Israel with its few proselytes. And the wall of partition still stood high to keep them from influences from the Gentile world.

Roman epistle was written ONLY to those who knew (and practiced) the Law; and gentiles in general had no share in this. Only proselytes had.

Rom. 3:31 tells that the Law was still in effect, saying,

“Do we then by this faith (in Christ) make the Law of no effect, overthrow it or make it a dead letter? Certainly not! On the contrary, we confirm and establish and uphold the Law.”

Rom. 7:1 therefore saying that this epistle was addressed to Jews only plus proselytes,

“Do you not know, brethren – for I am speaking to men who are acquainted with the Law – that legal claims have power over a person only for as long as he is alive?”

This way WE KNOW FOR CERTAIN that also Rom. 2:29 falls under the same rule, of having the Jews/proselytes as addressees. Paul taught this in capacity of teaching the New Covenant gospel to Israel, and thus the Law was still standing, however upgraded/overruled by the New Covenant regarding the Jewish believers standing as righteous believers, even if they at a point had broken the Law. Paul confirmed this in Acts 13:39 telling the synagogue at Antioch, Pisidia,

“And that through Him everyone who believes is absolved from every charge from which he could not be justified by the Law of Moses and given right standing with God.”

But as soon as we jump a few years (4-5) ahead, to Ephesians 2:15 – as the Church dispensation just had been established with the free Grace of God by faith only, we find that same Law ABOLISHED entirely. A new dispensation had kicked in, and the previous one when the apostles preached the New Covenant to Israel and proselytes, had ceased,

“…by …..abolishing in His own flesh the enmity the Law with its decrees and ordinances; that He from the two might create in Himself one new man, so making peace.” 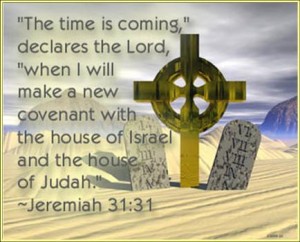 We must understand that in Romans the Law was in effect together with the New Covenant to Israel’s house (see Heb. 8 and 9) thus the Church of the free Grace gospel was not established yet, – but coming to Eph. 2:15 four years later as Paul sat in custody in his rented house, the same Law was no longer operative! And what a difference, is it not!?

The silly and foolish assumption inside Christianity that the New Covenant was for the Church, is indisputably wrong. Jer. 31:31 clearly speak straight forward saying,

The Church is NOT Israel and never can be. We were offered through Paul’s ministry the free Grace of God in Christ by faith alone, and no covenant! Eph. 2:8 is equally clear on that.

This is why Jesus publicly declared that He was NOT sent to any other group of people than the ‘Lost sheep of the house of Israel, Matt. 15:24. Simply put: The New Covenant was only offered to Israel including Judah, and of course Jesus knew this very well.

Anyone who tries to put the Church into Jer. 31:31 where it says Israel’s house and Judah’s house, are in reality trying to alter the Word of God. And this the most denominations have already done…many decades ago, since the so-called church fathers.

So then, when preachers in error keep on believing that Paul was speaking of the Church, the Body of Christ, the ‘One New Man’ in Rom. 2:29 they are so totally in the fog.

They who believed on Jesus Christ were to be considered as REAL JEWS, having same faith as Abraham. But the unbeliever would not be helped even if he thought that he was one of the heirs of Abraham. You simply had to be a believing Jew to be able to remain a true heir of Abraham, who was made righteous by faith.

Raving fanatical ignorant preachers keep on saying that the Church is the REAL Israel – but the Bible tells us that only a believing Jew can be counted in, and with the other believers make up the REAL Israel of God.

This type of believing Jews will be dominant in the future millennial kingdom, after Jesus has established His kingdom as prophesied.

The Church has its own salvation separate from Israel. The Church is NOT going into the future millennial kingdom, but has its hope in heaven, in that heaven where Christ now sits at His Father’s right hand. Col. 3:1-4.

All those who say that the Church has taken Israel’s place in God’s promises are falsely becoming proponents for the infamous ‘Replacement Theology’.