Will It Become Literally As In
the Days of Noah At the
Second Advent of Christ?

Large groups of preachers and pastors, particularly in the USA, seem to believe that Jesus prophesied of the return of the Nephilim-giants. These huge hybrids, being offspring from fallen angels and regular women, which emerged as dangerous evil creatures of forbidden genes. See Gen. 6:2-5. They existed in the time of Noah says the Bible.

Youtube and the Internet in general have tons of articles and videos on the subject. Here is an image of the skeleton of such creature, showing how huge these hybrids were. 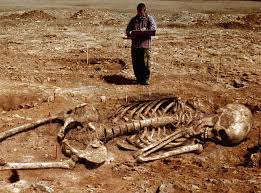 So, let us have a closer look at what Jesus really said, and also check out the context He put these things in when He told them.

KJV-Bible says the same things. As do the Amplified Bible.

One could go on with wild speculations of the Nephilim-issue…which seem to dominate the Youtube in particular.

But it is my opinion, backed by the Bible, that this is not the point of this prophesy. Jesus is clearly pointing to the ‘Surprise Factor’ – ‘and they knew nothing about what would happen until the flood came and took them all away. That is how it will be at the coming of the Son of Man.’

How come Jesus never mentioned the eventual return of the Nephilim giants? Implicating that fallen angels again would go and have children with regular women.

From the quoted verses it also come obvious to us, that the ignorance of that prophesied doom does not comply with the fact that Internet and other media has tons of Christian expositions on the Second Advent. The world actually thus know what will come in the end times. And still, people will be taken totally by surprise. That tells me that people at large do not pay much attention to warnings and preaching from the Christian pulpits, or what we put out on Internet. They keep on with their happy merry lives…some marries and some don’t, and people eat and drink and push all warnings aside. They simply don’t believe that there will be a Second Advent, they think we Christians are promoting fiction, more or less.

It is therefore obvious that Jesus’ main point in His speech was not the ancient happenings regarding that which took place before the flood, but that – just like those people, the ones on earth when Jesus is coming from heaven will be surprised and astonished. Nephilim or no Nephilim, that is entirely irrelevant.

Therefore I cannot see in the Bible anything which should indicate an eventual return of the Nephilim. It is a speculation and not Biblical facts. Some goes to the extreme, saying anti-Christ will be such a Nephilim! It is totally wild.